It’s been quite a ride, but every day I wake up with a smile 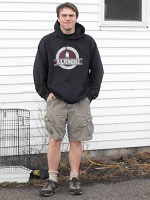 I’m Alexander, but I go by Sasha (a salute to my Russian and Ukrainian background). I’m in my early 20s, I’m from New York and I am a recent college graduate, with a diagnosis of Asperger’s syndrome and ADHD, and for many years, I battled depression.

Other than some unusual characteristics about myself (eating solid food before I was old enough to walk, escaping my mom and dad’s apartment), I was your average toddler. But I was a late talker, and yet I could read very well. I was placed into a pre-school special education program, in a (successful) attempt to get me to speak more than a few words. Today, I can’t stop talking, which sometimes gets me in trouble.

From kindergarten to my senior year of high school, I was classified as a special ed student. In kindergarten, I didn’t understand why at first I had a nearly-hour long bus ride each day. In suburban New York, students are sometimes placed in self-contained programs that are not in their home school district. Between the second and ninth grades, I would get on the school bus every morning before 7AM. On most days, I would not be off the bus before 4 or even 5PM, depending on the school year. In essence, I was a prisoner in my own community, unwelcome in anyone’s home.I quickly learned to resent being sent to another town’s school, even though at the time it was what I needed. Until the fourth grade I didn’t have any friends, and it wasn’t until middle school that I made friends with someone I still am in a friendship with today. Teachers spent more time trying to keep me from having meltdowns than they did teaching me. To this day, despite being a college graduate with a bachelor’s degree, I still feel like I have gaps in my education.

The husband of one of my mom’s co-workers speculated that I showed signs of autism as early as 1994. It would be another twelve years before I received even something as close to a diagnosis. That co-worker’s husband was right on the money (and this man made millions in the financial sector, and had not one ounce of medical training). Depression medication only helped in some ways, but a psychiatrist my mom took me to said that the only way I would function normally would be if I resided with my mom and stepdad. Eventually the combination of my stepdad taking me under his wing, medication, one-on-one psychotherapy every week and a more stable environment did wonders, and slowly I started making progress. My self-esteem improved. I was more confident.

2005 was a watershed year for me, just like the two following years would be as well. That March, my mom and I picked up a copy of Newsweek which featured a section on autism. It was one of the first instances when I read about Asperger’s syndrome. My aunt (mother’s sister) was also reading up on autism and Asperger’s, and not before long I was given an unofficial autism diagnosis and further tests determined that it was indeed Asperger’s. It was also that fall that I would be taking the “big bus” again. The school district budget failed and to cut costs to allow the budget to pass on a second vote (which it did) I believe they let me be mostly mainstreamed in the high school in my own town, as sending a student out of district is costly. That and a demonstration of mine (taking a mainstream class without assistance and some self-advocacy) made the move doable

Moving to the small village of Brushton, New York, in the fall of 2006 was a godsend. It turns out that Brushton, one of the poorest communities in all of New York, provided me with a comfortable environment to learn and thrive. Aspirations that were impossible in Brewster were easy to accomplish in Brushton. By my senior year I was class secretary, a member of the student council, a National Honor Society member, I competed in the state school music association competition, competed in the county mock trial tournament, and after graduation I was asked to judge speech and debate tournaments for the school’s team, and through that I made a lot of friends. From finding myself an outcast in elementary school, I suddenly found myself with a group of friends, the “popular” crowd at my high school. I graduated at the near top of my class.

After a rocky start to college, and later transferring after a year at a community college to the four year school (SUNY Potsdam) about forty minutes from home, I found my success continuing. Another physician (a pediatrician by training who specializes in child behavior) reaffirmed the Asperger’s diagnosis. I was elected to represent my fellow dorm mates in the student government assembly, wrote for the college newspaper, and launched my college’s first effort towards autism awareness, after meeting a professor of special education who invited me to talk with her classes about my experience with autism, hoping that a generation of future teachers have a better understanding of that autism comes in all shapes and sizes.

Some of the goals I have in my life are to get elected to public office (something that might make me the first elected public official with autism), get married and raise a family of my own, but most importantly, be the most successful person I can be. In the meantime, I am writing a novel about a college student with autism (a very fictionalized take on my own college experiences) and looking for a job in the aviation field.

Success has been something I’ve dreamed of, but have had to work for, and finally, I’m enjoying the results of that hard work, and there are countless people I thank for helping me along the way. It’s been quite a ride, but every day I wake up with a smile, ready to face the challenges of the world around me, excited to see what is in store. If there one thing about me, it’s that my enthusiasm is infectious.