Living a Healthier Life: A Report by AbilityPath Provides Tips for “Finding Balance” 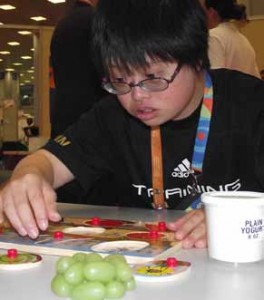 New Year’s resolutions are easy to make, but hard to keep. According to a recent statistic, the number one resolution is to “lose weight” and coming in at number five is to “eat healthier.” It’s clear that eating healthy, staying fit and losing weight are often at the top of our lists when we start a new year. But maintaining a healthy weight can be a lifelong battle, especially for individuals with disabilities.

Children with special needs are far more likely to be overweight or obese than their counterparts according toFinding Balance: Obesity and Children with Special Needs, a groundbreaking report produced by AbilityPath.org, an online resource hub and social community for parents and professionals serving the needs of adults and children with disabilities. This landmark report, the first to focus exclusively on how the obesity epidemic affects children with disabilities, presents not only the extent and causes of the problem, but also offers practical solutions for families and others caring for these children.

As the CEO of Community Gatepath, the nonprofit organization that created AbilityPath.org, I decided to releaseFinding Balance after hearing for years about the struggles that families faced in their efforts to keep their children with disabilities at a healthy weight. Food issues, medication side effects, limited mobility and limited access to sports and other active recreational activities make the challenges families face even harder. Few people understand how many obstacles there are and how few resources on this subject exist.

One of the many stories we share in this report is of Alex, a 12-year-old boy with autism who seemed to be a typically developing child until about age four when his mother says, “He kind of fell off the planet.” As Alex grew older, he became more aggressive and when he turned eight, his mother, Elisa, put him on the drug Abilify. “It saved our lives in terms of him being able to live with the family,” she says. But the drug had some potent side effects. Alex gained 45 pounds the first year he was on it. “He also became calmer, more relaxed and more sedentary and he didn’t know what to do with his new body. Since then, he’s definitely had a weight issue,” Elisa recalls.

Over time, Alex’s blood sugar rose dangerously high to the point where he was considered pre-diabetic. With the help of an endocrinologist, Elisa was able to retool Alex’s diet to bring his blood sugar down, but the scare was enough to keep her vigilant about Alex’s eating habits, while also reducing the amount of Abilify he takes. “I can’t imagine my life with his challenges plus having to deal with insulin shots and monitoring his sugar,” she says. “It would just be a nightmare.”

Alex is now 5’3” and weighs about 135 lbs. He can run a mile with his adapted physical education coach, plays soccer on weekends and loves to swim. Still, he’s no longer the active runner and jumper he was before the medication. “It’s hard to get him to move, whereas before, it was hard to get him to sit still,” Elisa says. “He’s easier to live with but there’s been a cost to his health.”

For too long the national discussion about obesity has excluded millions of children who are most affected. Our eye-opening report and Parent Toolkit allow parents and others to find the right balance of solutions as they work to improve the health, nutrition and fitness of their children with disabilities. This report shows there is hope and that it is well within reach.

For 2015, we hope to help parents whose New Year’s resolution is finding balance by providing them with strategies and tips to help their child develop a healthy relationship with food and work towards a healthier lifestyle. The full report can be downloaded by visiting www.abilitypath.org.

As Chief Executive Officer of Community Gatepath (Gatepath) and AbilityPath.org, Sheryl Young oversees one of the largest and oldest nonprofit organizations in San Mateo County, California. Gatepath annually serves 8,500 children, adults, seniors, their families and the professionals that support them through direct programs, support services, education and awareness. The agency’s mission is “Turning Disabilities Into Possibilities” for 90 years.

Young is a graduate of the Stanford University Graduate School of Business Executive Program for Non-Profit Leaders and also earned a M.A. of Public Health from the University of California at Berkeley, a M.A. in Special Education from Ball State University and a B.A. in Political Science from Purdue University.