Risk of recurrence of autism in younger siblings higher than thought

The new study released today by the UC Davis Mind Institute increases the risk rate of having a second child with autism to be nearly 19 percent. Previously estimated at between 3 and 10 percent, the Mind Institute study is the largest conducted to date and is the most geographically diverse-including families across the United States and Canada.

“This study provides us with a great source of information for families and their medical/therapy teams,” notes Sheryl Young, CEO of AbilityPath.org. “Parents always ask about the risk of having another child with autism and now we have new data to direct them to. For pediatricians and therapists this should kick off a series of conversations and careful milestone monitoring for the newest addition to the family.”

The other statistic of this report is that little over 80% of families go on to have a second child without autism. “Having another child is a very personal decision for any family,” confirms Grace Gengeoux, Ph.D., BCBA-D at the Child and Adolescent Psychiatry Clinic at Stanford University School of Medicine. “Many families who have one child with ASD go on to have typically developing children after and for those families who have a second child with ASD are often comforted knowing they can identify the concerns very early and seek early intervention.”

AbilityPath and Community Gatepath, the nonprofit sponsoring this site, will be featured on the evening news on KTVU Fox 2 in response to the new study.

(SACRAMENTO, Calif.) — The risk that an infant with an older sibling with autism also will develop the disorder, previously estimated at between 3 and 10 percent, is substantially higher at approximately 19 percent, a large, international, multi-site study led by researchers at the UC Davis MIND Institute has found. While the study found a combined estimated risk for all participants of nearly 19 percent, it found an even more elevated risk of recurrence of over 26 percent for male infants, and over 32 percent for infants with more than one older sibling with autism.

The study is the largest prospective investigation of autism spectrum disorder and sibling recurrence to date. It is published online today and will appear in print in the September issue of the journal Pediatrics. 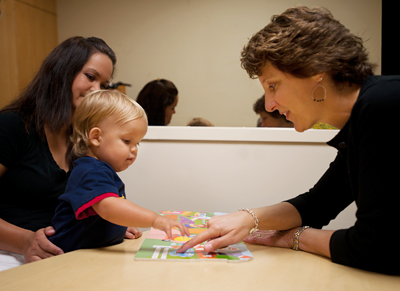 The study has important implications both for genetic counseling for parents and for referral to early intervention for the infant siblings of children with autism if concerns arise about their development, said Sally Ozonoff, professor of psychiatry and behavioral sciences at the MIND Institute and the study’s lead author.

“This is the largest study of the siblings of children with autism ever conducted,” Ozonoff said. “There is no previous study that identified a risk of recurrence that is this high,” she said.

Autism is a complex disorder that affects a child’s ability to think, communicate, interact socially and learn. The U.S. Centers for Disease Control and Prevention places the incidence of autism at 1 in 110 children born today.

The participants in the study were enrolled in separate studies that are part of the Baby Siblings Research Consortium, an international network supported by Autism Speaks that pools data from individually funded research sites to facilitate the study of infants at high risk of developing autism because they have an older sibling with the condition. There is strong evidence that genetic factors play a critical role in vulnerability for developing autism.

Twelve consortium sites located in the United States and Canada participated in the study, with additional sites as far away as Israel engaged in analyses and interpretation of the data. The study included 664 subjects, infants whose average age at enrollment was 8 months, with two-thirds recruited prior to 6 months of age. The researchers followed the participants’ development until 36 months, when they were tested for autism.

The study subjects were tested using the Autism Diagnostic Observation Schedule (ADOS), an autism diagnostic tool, and the Mullen Scales of Early Learning, which measures nonverbal cognitive, language and motor skills. Of the 664 participants, a total of 132 infants met the criteria for an autism spectrum disorder. Fifty-four received a diagnosis of autistic disorder and 78 received a diagnosis of Pervasive Developmental Delay Not Otherwise Specified, considered a milder form of autism.

More males than females are affected with autism — 80 percent of all affected children are male. The risk to male children held true in the current study. Among the study participants, 26.2 percent of male infants versus 9 percent of female infants were diagnosed with an autism spectrum disorder.

The overall rate of autism spectrum outcomes for all study participants was 18.7 percent. However, there was a significant difference in the recurrence rate based on whether the child had one sibling or more than one sibling with autism. In families with one older child with autism, or simplex families, the rate of incidence was 20.1 percent. Only 37 of the study participants had more than one sibling with autism. But for those families, called multiplex families, the recurrence rate was 32.2 percent.

“It’s important to recognize that these are estimates that are averaged across all of the families. So, for some families, the risk will be greater than 18.7 percent, and for other families it would be less than 18.7 percent. At the present time, unfortunately, we do not know how to estimate an individual family’s actual risk,” Ozonoff said.

Ozonoff said that the study’s large size, prospective design, the young age of study participants at enrollment and the gold-standard direct-assessment methods used, as well as the geographic diversity of participants, reinforce the accuracy of its findings. The study design also minimized the effects of other factors such as “stoppage,” the tendency of families with a child with autism to stop having children, which would lead to an underestimate of potential recurrence rates. The study accounted for stoppage by studying only families with later-born siblings.

She said that the study has significant family planning and genetic-counseling implications. “Parents often ask what their risk of having another child with ASD is and, until now, we were really not sure of the answer,” Ozonoff said.

The study also highlights the critical importance of routine surveillance and rapid referral for treatment of infant siblings of children with autism. It is of paramount importance that primary care professionals monitor these children’s development closely and refer them for early intervention when concerns arise, said Autism Speaks Chief Science Officer Geraldine Dawson.

“By pulling together data from many investigators who are studying infant siblings of children with autism, this study offers a more accurate estimate of the recurrence rate for autism in siblings,” Dawson said. “Surprisingly, the rate is much higher than previous estimates. This points to the important need for closely monitoring and screening siblings so that they can be offered intervention as early as possible. Early intervention ensures the best possible outcomes.”

In practice guidelines published by the American Academy of Pediatrics in 2007, being a younger sibling of a child with autism is considered a risk factor requiring special developmental evaluation and the current investigation supported that recommendation.

“This study shows that the younger siblings of children with autism spectrum disorders need to be tracked very carefully, and this may require more than the normal surveillance that a pediatrician might typically do,” Ozonoff said. “This should include very explicitly and regularly checking in with parents on whether developmental milestones are being reached.”

For more information about the early signs of autism, visit the Autism Speaks Learn the Early Signs website.

The study was funded by grants from the National Institutes of Health, the United States-Israel Binational Science Foundation, Canadian Institute for Health Research and Autism Speaks.

At the UC Davis MIND Institute, world-renowned scientists engage in research to find improved treatments as well as the causes and cures for autism, attention-deficit/hyperactivity disorder, fragile X syndrome, Tourette syndrome and other neurodevelopmental disorders. Advances in neuroscience, molecular biology, genetics, pharmacology and behavioral sciences are making inroads into a better understanding of brain function. The UC Davis MIND Institute draws from these and other disciplines to conduct collaborative, multidisciplinary research. For more information, visit mindinstitute.ucdavis.edu.