Parenting a Child With Autism 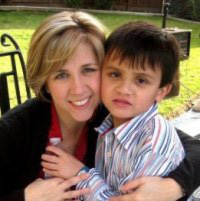 Lisa Valerio is a mother of a 6.5-year-old beautiful boy named Nathan. Nathan was a happy and easy baby that met all his developmental milestones. Then a month after his 2nd birthday, his development began to shift. Words began disappearing from his repertoire, he stopped pointing, ceiling fans caused him anxiety, and he became fixated on spinning objects. Lisa mentioned her concerns to her sister, a Special Education Teacher. It was at this time her sister indicated she had noticed some early signs of autism, but was too nervous to say anything.
Lisa immediately contacted Nathan’s pediatrician who recommended a speech evaluation. Nathan’s speech was evaluated and speech therapy was recommended two times a week. Lisa expressed her concerns about autism with the Speech Pathologist who did not see any signs of autism; however, he recommended that she contact her regional center for an evaluation based on her concerns. Three months later Nathan was diagnosed with Autism, this is her story:

When you first got the diagnosis, what were your thoughts?
When I heard the word ‘autism’ I thought I was going to die. My body went into shock and ached like child labor. My husband was in denial and I quickly accepted, grieved, and started my research. With my stomach in knots, I went to the Internet and did a Google search on autism and could not even read what was in front of me. I am a businesswoman with drive and a ‘can do’ attitude – anything can be accomplished; but at this moment in my life I could not even function to read what was in front of me. I could not even tell my husband what was in store for us.

Upon Diagnosis, what was the first thing you did?
GGRC assigned a social worker and referred us to Community Gatepath for early intervention. I was spinning out of control and felt like I was on a treadmill that would not stop. Community Gatepath’s Services and their Family Resource Center helped get me on the road to getting my son the services he needed; ABA, OT, Speech, Diaper Service, Respite care, etc.

Did you also get a formal assessment after your diagnosis from the state?
I got an assessment when Nathan turned three from Dr. Rebecca Fineman PhD. (Ph.D. in Counseling Psychology). I had to wait four months to see her but it was worth it. She helped me build Nathan’s home based program – a play based ABA program tailored to his developmental level.

How many hours a week did Nathan receive therapy and/or treatment?
His home based program was 40 hours a week for three years. In addition to his home program, he received: Speech, OT, Floortime, DAN protocol (some of it – not all), therapeutic swim class, and therapeutic horseback riding. After three years of his home program, we switched him to a school for autistic children, WINGS Learning Center. He loves his school and is so happy there.

Which service did you find to be the most beneficial to Nathan?
I think OT really helps Nathan; I also want to add that the myriad of services working together was beneficial for my son. All his service providers and the direction of Dr. Fineman made this possible.

How did you pay/finance these services?
Nathan received some early intervention services from the regional center under the Early Start Program. I also had great success getting insurance to cover 75% of Nathan’s Therapy. My health insurance was state funded and I had to advocate greatly for this. The mental health parity law H&S Code1374.72 states:

There was a lot of recommended therapies that weren’t covered by either the regional center or my insurance company, I still moved forward with those therapies and have drained a large portion of my personal portfolio to do so.

If you could give parents one piece of advice that are beginning their journey into the world of Autism, what would it be?
Don’t give up and accept your child for who they are. Autism is a journey that I can look back on and say I have grown more these past few years than my entire adulthood. I believe that things happen for a reason; as painful at times as they may seem, they often end up with an incredible and wonderful reason. So, I will continue to reflect back in order to understand the reasons why my son has autism. People often say to me, “Nathan is so lucky to have you” but I am the one who is lucky because I have Nathan, ‘my gift’.

Lisa Valerio is enjoying raising Nathan as he thrives in his new school. She is also helping other families pursue insurance coverage at Autism Deserves Equal Coverage (ADEC) www.autismdeservesequalcoverage.com.