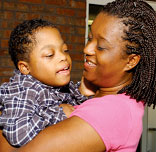 Parents of a child with autism have a 24 hour a day; 7 day a week job that instead of paying them costs them astronomical amounts of money.

According to the Autism Society of America, lifetime costs for caring for a child with autism can reach as high as $5 million in treatment and therapy. And in most cases, insurance, even good insurance, won’t cover the majority of these services their child needs. This leads many families financially strapped as they take out additional lines of credit, and in some cases even file bankruptcy to ensure their child receives treatment and therapy for their disability. And the most expensive treatment which may also holds the greatest hope for the child is Applied Behavioral Analysis (ABA) which may or may not be covered by a health insurance plan.

This very intensive and demanding therapy generally includes the child and therapist breaking down behaviors into the most incremental small steps.  A child’s physician generally prescribes ABA after a diagnosis of autism. Many doctors, parents and autism experts believe ABA is currently one of the best forms of treatment for children with autism, especially those under the age of five whose brains and behaviors are still developing.

“As early as 12-18 months, changes in children’s lives …[shape] into behavioral principles and have changes that last a lifetime,” states Dr. Sally Rogers, Ph.D Professor at the UC Davis Department of Psychiatry and Behavioral Sciences.  “Early and earlier, well focused interventions may result in drastically resulted outcomes for children of autism.”

School district program cuts have led to many parents and professionals looking to states regulating insurance coverage of autism therapy, specifically ABA. Missouri become the 21st state today (June 10, 2010) requiring insurance coverage for children with autism and related disorders with Governor Jay Nixon signing the autism coverage bill. The measure specifically requires coverage of ABA; insurance providers must cover up to $40,000 of therapy each year for children until age 18.