Retinopathy of Prematurity (ROP) is an eye disorder affecting premature infants. This disorder was called Retrolental Fibroplasia in the past.

ROP affects immature blood vessels of the retina. It occurs weeks after birth. Once development of blood vessels is complete, a child is no longer a candidate for this disorder.

As pictured in the graphic of the retina: 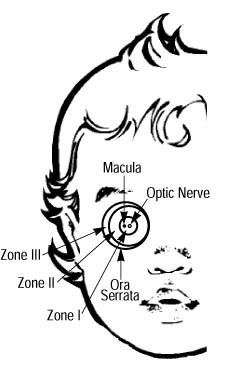 Zone One is centered on the Macula (which is the area of central vision needed for reading).
Zone Two refers to an area that is doughnut shaped that extends to the edge closest to the nose.
Zone Three refers to the crescent shaped area toward the ear. If disease appears in Zone One (as can happen with extremely low birthweight infants), damage to the retina tends to be more severe. If Zone Three is affected, the premature infant will tend to have mild involvement, leading to useful vision.

The suggested causes of Retinopathy of Prematurity are those conditions which stop the orderly growth of retinal blood vessels and stimulate their wild overgrowth. Over 50 conditions have been proposed and thus far, have not been ruled out. The most frequently mentioned conditions are prematurity, excessive oxygen, infection, and/or excessive exposure to light.

STAGES OF RETINOPATHY OF PREMATURITY

It is critical that doctors examine the retinas of premature infants until blood vessels have reached the edge of the retina. One or more of the following treatments have been suggested to stop the overgrowth of blood vessels or to reattach the retina: cryotherapy (the only treatment proven by rigorous testing), laser treatment, scleral buckling, and vitrectomy.

Children with an initial diagnosis of ROP are at risk for developing secondary visual impairment including cataracts, glaucoma, and retinal detachment. Other eye conditions such as myopia, nystagmus, strabismus, or microphthalmia may also occur. Children with ROP may exhibit other impairments associated with extreme prematurity, such as cortical visual impairment, cerebral palsy, or learning disabilities.

Many of the behaviors of children with ROP may be related to prematurity and not necessarily to vision loss. Learning difficulties associated with neurological disorders may accompany prematurity. These may show up in areas of abstract reasoning, for instance, or in the child’s unwillingness to touch and handle certain textures. The way a premie with ROP understands his position in space, or the manner he uses to walk (gait) may also be different than that of a child who has a different visual diagnosis. Eye pressing, body rocking, head swiveling or hand flapping are also part of the behavior pattern some children with visual impairments exhibit.
A child with ROP may use a head tilt or unusual body position to accommodate for poor vision, vision in one eye (monocular vision), or a reduced visual field. In addition, research suggests that blue-yellow color deficits in children who have ROP are 200-2000 times that of the general population.

The following statements are NOT TRUE, according to current knowledge in the field:

Moss, K. (1994). Looking at Self Stimulation in the Pursuit of Leisure or I+m Okay, You Have a Mannerism, P.S. News!!! Texas School for the Blind, Austin, TX.

The Pediatric Visual Diagnosis Fact Sheets are sponsored by a grant from the Blind Children’s Center and with support from the Hilton/Perkins Program through a grant from the Conrad Hilton Foundation of Reno, Nevada