An overview of risk factors that help explain the epidemic of obesity within the special needs community.

“There are so many factors that have to be dealt with, particularly when you get into the more severe level of disability where there are physical, sensory, cognitive and behavioral issues. There are financial issues. There are sibling issues, other children that need attention. Unfortunately health promotion is not something that gets to a high enough level of urgency in many families, not because it isn’t important but because of all the other necessities that are essential to sustaining all the other parts of that child’s life and the family’s life.”

RISK FACTORS FOR OBESITY IN THE GENERAL POPULATION
The causes of obesity are no mystery, and yet, paradoxically, its precipitous rise is not fully understood. In simplest terms, people gain weight when they consume more calories than they expend. But the root causes behind the calorie/activity imbalance are the subject of some debate. Is it our sedentary lifestyles? Is it our highly processed foods? Or are there other factors to consider?

Commonly cited reasons for obesity include:

A 2006 study published in the International Journal of Obesity listed some other possible causes that are less frequently cited. They include: 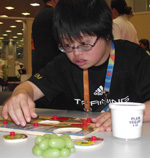 RISK FACTOR 1: A MORE COMPLEX RELATIONSHIP WITH FOOD
A healthy diet is high in fruits and vegetables, whole grains, and proteins and low in sugars and fats. But children with disabilities may have physical or behavioral barriers to a healthy diet. Children with Down syndrome and cerebral palsy may have trouble chewing or swallowing, which can lead them to eat softer and more processed foods. Children with autism spectrum disorder may have an intense aversion to certain textures, flavors or colors, leading them to eat a very limited assortment of foods. “You may have a parent saying, ‘All he eats is peanut butter and jelly sandwiches,’” says Paul Carbonne, M.D., Assistant Professor of Pediatrics at the University of Utah, School of Medicine. “And it’s not as easy as saying, ‘Don’t give them that stuff.’”

Parents of children with special needs often are reluctant to clash with their children over food, either because they are already fighting enough behavioral battles or because they don’t want to remove a source of pleasure for a child who has many challenges. “Sometimes the one thing families can do to make [their children] feel better is to feed them,” observes Verna Baker, M.S., R.D., L.D., a dietician who works with children with special needs through a program called KIDS FIRST at the University of Arkansas for Medical Sciences Department of Pediatrics.

Another factor is peer influence. The desire to fit in is strong for any child, particularly one with a disability. If other kids are eating candy and drinking soda, trying to avoid these foods becomes even more difficult, especially if these choices are widely available on school campuses. The other food challenge is the fact that parents, therapists and teachers alike may be in the habit of using food for behavior modification, rewarding desired behavior with sweet treats or – less frequently — punishing undesired behavior by withholding them. Both approaches tend to make these foods more desirable.

Sometimes food is simply used to express affection or win compliance. “Parents tell us all the time that it happens in schools,” behavioral psychologist Richard Fleming, Ph.D., M.S., M.Ed., of the Eunice Kennedy Shriver Center at the University of Massachusetts. “School staff wink and put an extra serving on their plate. I’ve heard it so many times – they think they’re doing a sweet thing by putting an extra cookie on the plate. It’s a strange form of discrimination.”

RISK FACTOR 2: BARRIERS TO EXERCISE
Exercise is vital not just for maintaining a healthy weight, but also for muscle tone, circulation and mood. When children with disabilities exercise regularly, they are helping to control the progression of chronic disease and functional decline, while improving their overall health. But 39% of youth with physical disabilities report never exercising at all, according to one study. 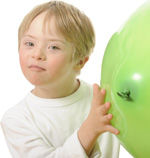 The reasons are many. Children with cardiac or respiratory conditions tend to tire more easily, making it harder for them to participate in physical activity. Children with cerebral palsy, spina bifida or muscular dystrophy may have significant mobility issues. Many children with disabilities need modifications to be able to participate in fitness activities but may not have access to adaptive equipment or to inclusive recreation classes. While children with a wide variety of disabilities enjoy playing in the water, for example, that option may not be available to them if the pool does not have a lift for getting in and out. One study of the factors affecting recreation and leisure participation of children with disabilities found that the top three barriers were the child’s own functional limitations, the high cost of specialized programs and equipment, and a lack of nearby facilities or programs.

RISK FACTOR 3: MEDICATIONS
Seventy-five percent of children with a special health care need take at least one prescription drug. Many medications, particularly certain antipsychotics, antidepressants, anticonvulsants, neuroleptics and mood stabilizers, are associated with weight gain. “From what we see happening, it seems that physicians don’t necessarily look that closely at the consequences of prescribing those types of medications in terms of it being detrimental to a child’s health in other ways,” says Dr. Fox. 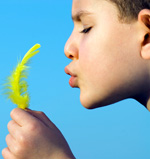 RISK FACTOR 4: FAMILY STRESS
Parents of children with special needs often have schedules crowded with medical and therapeutic appointments, extra transportation responsibilities as they shuttle children to activities and services, and a variety of extra care-giving duties at home. With so much to do, high calorie prepared or packaged food may seem like a more viable option rather than cooking meals from scratch. By the same token, exercise may have fallen into the category of “maybe someday, when we have time.”

In addition, 21% of families of children with special needs report that their child’s disability has caused financial burdens, either because it has made it difficult to work fulltime or because of out-of-pocket expenses not covered by insurance. Healthy food, inclusive fitness classes or professional consultation may simply be out of reach financially. “Reimbursement for nutritional counseling and services is non-existent in some cases and low in others,” says Baker.

Taken together, the extra financial and caretaking burdens can make weight management initiatives seem overwhelming. As one study points out, “Time and money needed to arrange for healthy meals, increasing physical activity and reducing screen time may be harder for families also struggling with finances, caretaker time and energy, and pressures associated with employment.”

RISK FACTOR 6: PERCEIVED RISK
Children with special needs are often eager to participate in fitness activities. But parents, teachers, pediatricians and coaches may feel that the activity will be too difficult, too dangerous, or too disappointing for a child with a physical, intellectual, or behavioral disability. “Some of this has to do with stereotypes – the idea that kids with disabilities are ‘too sick’ to engage in physical activity,” says Dr. Fox. One study has found that pediatricians frequently underestimate the benefits and overestimate the risks of physical recreation for children with chronic health issues. 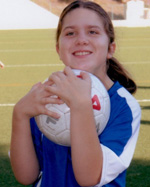 Parents tend to worry both about their child experiencing failure when they attempt a physical challenge, and that the child will get hurt. In a study of 11-16 year olds with physical disabilities, 68 % felt that “their parents stop them from doing what they want to do because they worry too much.”

“Parents don’t want their kids to get hurt or to put them into a situation where they’re vulnerable,” says Dr. Nancy Murphy, M.D., Department of Pediatrics at the University of Utah School of Medicine. “All kids are going to fall and skin their knees and sprain their ankles. It’s OK. The benefits so outweigh the risks, it’s worth taking the risks.” In fact, athletes with disabilities have rates of injury that are similar to other athletes. “Everything’s a risk in life,” agrees Dr.Rimmer. “But it’s a greater risk to sit and do nothing. Because in the long run that’s not going to prevent a child from developing obesity or diabetes.”

Parental concern about their child’s safety should not be dismissed. For some children inclusive sports are a possibility, while for others they are not, but that is why options like Special Olympics, AYSO’s VIP soccer program for kids with disabilities and Little League Baseball’s Challenger League exist; they are all designed to support and encourage kids of varying ages and abilities to participate in team sports. “We’ve got to get them moving. We have to challenge [kids] to enjoy it and luxuriate in the fun and the physical health and the emotional health that comes from exercise,” says Timothy Shriver, Chairman and CEO of Special Olympics. “Sports and fitness and nutrition are part of a piece that goes together.” Children whose abilities or temperaments don’t lend themselves to team sports still have many options for being active safely with the help of adaptive equipment and protective gear. Often, says Shriver, parents’ fears are “rooted in a bad sports model” based on winners and losers. “We need positive sports models,” he says. “We need parents to ask their parks and recreation departments, their YMCAs to create participatory models that help people feel fit and healthy and not feel excluded or rank-ordered.”

RISK FACTOR 6: SOCIAL ISOLATION
Children whose special health care needs may have fewer friends than other children their age and thus may miss out on the chance for free play in an outdoor setting. At the same time, they may also be excluded from team sports because others believe they won’t contribute to victory. “Who doesn’t remember being picked last for the team?” says Shriver. “We need to model sports and recreation that are inclusive and find sports and fitness programs that are for all ability levels, not just the best ability levels.” Unless given a chance to engage in either structured or unstructured physical activity, children with special needs are likely to be inactive. Special Olympics research has shows that the social aspect of sports is one of the main reasons athletes become involved. In addition to its programming for athletes with intellectual disabilities, the organization developed Unified Sports, providing its athletes with the opportunity to play on teams with “partners” or athletes without disabilities.

RISK FACTOR 7: SCREEN TIME
Most children in our culture have access to a mind-boggling assortment of sedentary diversions like television, video games and computers. Those amusements can feel heaven-sent to families whose children are prevented from participating in other activities and they are often used to provide “down time” for overstressed parents and children alike. At the same time though, screen time is strongly associated with obesity. “If a child is less engaged in physical activity than they’re more engaged in sedentary behavior. It’s an either/or. The more you get them on the side of activity, the less time they have for screen time and other sedentary behaviors,” saysDr. Rimmer.

While the reasons for this are not fully understood, studies have found that television viewing lowers the rate of children’s metabolism more than resting does. At the same time, television viewers are exposed to a steady bombardment of advertisements for soda, snack foods, fast foods, and candy which is one reason people tend to snack while in front of the television. “Childhood obesity is almost directly correlated with the amount of time children spend in front of computers and televisions,”says Dr. Fox.