He’s known as dad to three and “coach” to a lucky group of San Francisco Bay Area youth. Darrin Uecker is the guy you want as your neighbor, your friend and as your child’s coach. For a group of about 50 kids with special needs and their families, he is just that.Darrin has formed a never before Challenger League team in Hillsborough, California and then established an AYSO VIP soccer team and after the kids on his teams asked, “What’s next coach?” he started a basketball team on his own with the help of Nothing But Hoops , who offered their indoor facility to Darrin and his team. “I grew up playing sports, so I decided to look around to see what my son could play,” said Darrin.

August, Darrin’s son who is 11, has autism and is the inspiration behind Darrin’s quest to provide sports opportunities for kids of all abilities. “It’s awesome to see the kids on the field and play in an environment which is not stressful andwhere there’s no pressure,” recalls Darrin.“It’s just the greatest thing!” We agree. There is something magical that happens on the field. The day we went to watch Darrin’s team, the Rays, the kids were having a blast and the parents were just as engaged, participating either on the field or as active cheerleaders. Darrin believes the uniforms play a big part in the magic. “They all get a uniform, which they love because they show up and all their buddies are wearing the same uniform and it unites them as a team.” 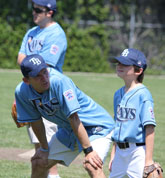 Darrin started these various teams because his son really enjoyed participating in sports just like his older brother but he’s noticed it isn’t just all fun and games. August has really grown during this experience as well. Darrin recalls a time when August actually let his dad know he could handle this, “When we first started I was really active with August on the field, helping and supporting him and about half way through the first year he turned to me and said, ‘Dad can you just go over there,’ it was really interesting because that was a huge thing for August, he had finally gotten comfortable and he didn’t necessarily need me hovering around him.”

Darrin encourages his parents to have whatever experience they want to have, if they or their kids want their parent on the field, they are welcomed and if the parent wants to take the time to catch their breath and just sit and cheer then Darrin really encourages parents to do so. “A lot of it is about letting the kids do what they want to do,” notes Darrin. “Your kid may run out into the outfield, but that ok I don’t mind running and getting them and it’s not disruptive because, you know what, others are doing it too. We’re just out here to have fun, not make big plays.” Watching the Rays play really brought back the essence of what community sports was intended to do—build teamwork, build community and create wonderful memories. 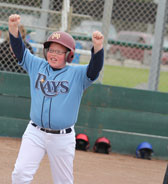 For some parents the idea of team sports isn’t a natural inclination for their child with special needs because of preconceived notions around competitive play, time commitment with practices and games and also worries around safety. “I’ve spent a lot of time talking with parents, letting them know its ok; assuring families it wasn’t competitive and it was just an hour and half a week commitment.” Darrin also shared that once parents came and saw how the Challenger or AYSO VIP program is different and takes into consideration accommodations for special needs, they get it and see how wonderful of an opportunity it is for their child. “Darrin has made a huge difference for so many kids and families! Liam (pictured left) loves baseball and soccer and basketball and looks forward to seeing coach Darrin every week,” remarks Lee McEnanyCaraher, mother of one of Darrin’s players.

Darrin hopes other dads read this and if they had dreams of playing catch or even enjoying an afternoon of sports with their child that they learn that even if your child has a special need, it doesn’t mean team sports can’t be a part of their lives. “Team sports is not just for typically developing kids. You got to get your kids involved. There are things out there like Challenger League or VIP Soccer and if it’s not you can start your own,” encourages Darrin. “When people make a big deal of what I do around sports I laugh because it’s easy relative to coaching a regular little team.” Darrin’s team is varied in their diagnosis and encourages parents to go see a game and if playing isn’t the right path for your child, still bring them out to support and be a part of the fan club. “Get them involved somehow, someway,” concludes Darrin.

Although it may seem like Darrin is a fulltime coach, he is CEO of Gynesonics, Inc, a women’s healthcare company focused on minimally invasive solutions for symptomatic uterine fibroids, and is raising three sons with his wife Marcie.