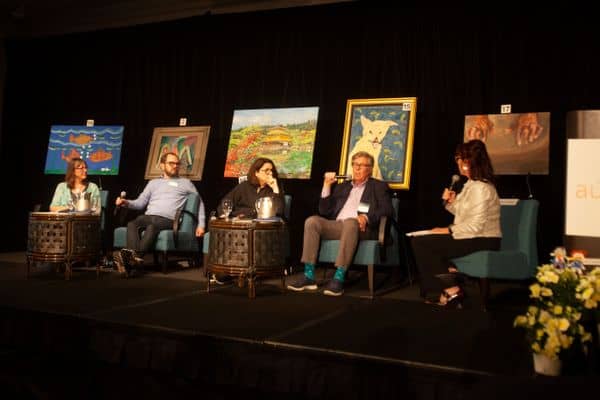 Palo Alto, CA — Abilities United 28th annual Authors Luncheon featuring renowned, best-selling authors David Maraniss, Cathleen Schine, J. Ryan Stradal, and Deborah Underwood attracted more than 370 attendees in support of the disabilities community on Saturday, November 2, 2019. Many of the attendees are not only book lovers who return year-after-year, but are long-standing Bay Area residents who are dedicated to ensuring the vital programs delivered to those served by Abilities United are sustainable for years to come.

This popular annual event raises funds for Abilities United services for children and adults with special needs and developmental disabilities. The authors, who came from various locations across the U.S., discussed their latest works and shared their literary inspiration.

A common theme among all the authors was acknowledging the urgent necessity for promoting inclusion and acceptance in an increasingly divisive society.

“As writers, we live in the world and then we write about it,” said Underwood, a prolific best-selling author of children’s books from San Francisco, CA who talked about the motivation behind her newly released book Finding Kindness. “With a world that is increasingly divided, I think kindness is the ultimate connector.”

Attendees also heard from Maraniss, a two-time Pulitzer Prize winning journalist from Washington, D.C., whose book A Good American Family tells the story of the 1950s McCarthy era through the lens of his father and said there are echoes of that period today.

“What does it mean to be an American, and who decides?” said Maraniss regarding the essence of his family biography.  His takeaway from what he learned about that period in American history while researching and writing the book: “Don’t believe ideology.  Search for truth. Hate racism, but not the racist … .”

“This year’s authors were absolutely terrific! We are so grateful to each one of them for generously spending their day with us to help raise awareness for our mission,” said Bryan Neider, CEO of the recently merged Gatepath and Abilities United nonprofit organizations. “It was evident that each author understood the vital importance and timeliness of advancing inclusion and diversity in our modern world, which is at the heart of the work we are doing every day in our community.”

For a second year, the event was emceed by comedian and journalist Maureen Langan, who had audience members laughing throughout the entire program. During the Q&A portion, Langan asked the authors about their writing process. Schine, an international bestselling author, gave the most unconventional response: “All writing should be done in bed.”  Alice in Bed was Schine’s first novel — an autobiography. Schine, a humorous writer who says she prefers to write from a king-sized bed, rather than a desk in Venice, CA, is currently promoting her recently released novel The Grammarians.

Stradal, who spent more than 14 years on the road as a producer for the VH1 hit reality shows The Bachelorette, Storage Wars and Deadliest Catch, says he learned to write in a variety of locations – even from the backseat of a truck.  His first novel Kitchens of the Great Midwest was a New York Times best-selling novel. Stradal grew up in Hastings, MN and says many of his characters are based on his family members. He is currently on a book tour to promote his second novel The Lager Queen of Minnesota.

The Authors Luncheon has raised more than $3 million over the years through ticket sales, sponsorship, book sales, the silent auction, and donations. According to Neider, this year’s Authors Luncheon was one of the most successful to date. Sponsors include Breaking Glass Forums, El Camino Health,  Goldman Sachs Gives, Stanley E. Hanson Foundation, and Wilson Sonsini Goodrich & Rosati Foundation, in addition to 24 individuals and families.

On July 1, 2019, Abilities United and Gatepath joined forces — making our combined nonprofit the largest provider of services to individuals with developmental disabilities on the Peninsula with 13 locations in San Mateo and Santa Clara Counties.

Gatepath has been a cornerstone of our community for more than 99 years, providing a lifespan of support services to individuals with special needs and developmental disabilities in the greater Bay Area. Our mission is to empower people with special needs to achieve their full potential through innovative, inclusive programs and community partnerships. With educational, therapeutic, vocational and family support services, we are distinctive in providing support to an individual throughout his or her lifetime. We collaborate with businesses, third party providers, local nonprofits and various organizations to bring the highest quality services to the children, youth and adults in our programs. Together, we are creating a world where people of all abilities are fully accepted, respected and included in all aspects of life – in the classroom, the workplace and in our communities.