You Have the Power to Influence Change

You Have the Power to Influence Change 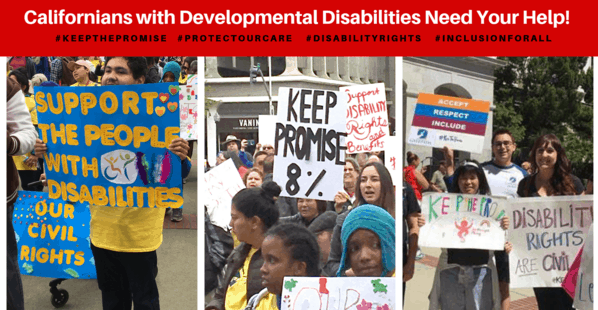 It’s been more than a decade since the Great Recession significantly impacted the funding for California’s developmental disability system. Since 2008 the cumulative budget cuts and inflationary impact to service providers has created a net shortfall of nearly $1.1 billion. Year after year, despite public outcry and protests by developmental disability advocacy groups, the State has been callously nonresponsive in addressing the funding needs required to stabilize our neglected system.

I am finally feeling the winds of change and I am pleased to report a glimmer of hope for California’s developmental disabilities community! The tide of public opinion is rising to support our movement for a critically needed 8% systemwide increase in state funding for California’s developmental disabilities system. This increase, estimated at $290 million of the $24.1 billion state budget surplus, would stabilize the system while the results of a recent Rate Study that was commissioned by the Department of Developmental Services is thoroughly vetted and implemented. The recommendations of the Rate Study would not be considered in the 2019-20 state budget, which is why we must act now.

Thank you to our community and engaged supporters who have organized rallies at government offices across the state. They have educated and informed our state legislators on how this funding crisis affects Californians with developmental disabilities — their constituents!  Your efforts are influencing change.

We know how important it is to make our voices heard. On the national level, we recently saw the impact public outcry had when the White House reversed the Department of Education’s proposed elimination of funding for Special Olympics. Public protests can be a very effective way for citizens to change policy by influencing and informing their elected officials. Our advocacy for improved funding is aimed at protecting access to much needed services for the children, families and adults we serve.  For us, the lack of funding has become a social justice issue, severely impacting the quality of life of those with developmental disabilities. Your voice is helping to reverse a decade history of underfunding the needs of those with developmental disabilities.

All of us at Gatepath are grateful for the many California State Senators and Assembly members, on both sides of the aisle, who are standing in solidarity with services providers, such as Gatepath and Abilities United, and keeping the promise of the Lanterman Act. When California passed The Lanterman Act, it became the model for the Americans with Disabilities Act, ensuring our most vulnerable residents receive the services they need to live full and productive lives in an inclusive society.

While I’m thrilled to see a groundswell of support from those championing our cause, we also know we need to continue our advocacy efforts. We have a small window of time before Governor Gavin Newsom finalizes the 2019-20 California State Budget. We need you to lend your support by signing our online petition to the Governor requesting a long overdue and much needed increase in funding for the developmental disabilities system. You can ensure change happens by advocating for added support for the important services California’s children and adults with developmental disabilities are entitled to receive.